Jeju Revisited from the Perspective of Korean Reunification 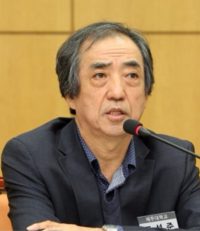 What would be the image that best represents Jeju Island? Jeju, often referred to as “an island of fantasy” due to its beautiful environment, is a globally recognized tourist destination. The island’s landscape inscribed as a UNESCO World Natural Heritage creates a breathtaking view of people harmonizing with nature. Another motto associated with Jeju is “an island of world peace.” Today, national borders have disappeared and the world is increasingly becoming interconnected by the idea of “global citizenship.” However, Korea remains the only divided nation in the world. National division signifies disconnection in a hyper-connected globe. In this regard, national reunification is a dream to be realized for the Korean people as well as a vital task to be accomplished for world peace. Korean reunification can never be achieved by external forces. It is a journey that the Korean people must complete with concerted efforts for their own national interest. By practicing reunification in their daily lives, and by living daily lives of reunification, Koreans can make the nation’s dream of reunification become a reality.Affluent stories and places should be created where people can ponder on and empathize with the necessity for national reunification in their everyday lives. Jeju should also be revisited as “an island of reunification and peace” that calls attention to Korean reunification. 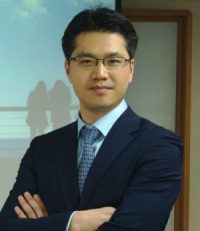 Jeju Revisited from the Perspective of Korean Reunification

Jeju is a popular resort island visited by many tourists from Korea and overseas. Unfortunately, these visitors often end up having the same experiences, visiting the same tourist sites. Jeju needs to diversify its content to allow for sustainable tourism that proves its value is worth multiple visits.

As the first step toward this goal, a book was published with the title “Jeju Revisited from the Perspective of Korean Reunification” (Jeju Institute of Korean Reunification, 2018). The publication is an attempt to reinterpret and rediscover the historic and cultural resources of Jeju Island from the perspective of reunification and peace. When discussing the reunification of Korea, Jeju should not be excluded. “From Halla to Baekdu,” a signature slogan for Korean reunification that is highlighted in this book, which introduces 41 spots on Jeju Island that are historically and culturally significant. One of them is the 1st Army Training Camp in Daejeong-up, a southwestern town in Seogwipo City.

During the Korean War, the army training camp was established on Jeju Island. During the war, it was difficult to train servicemen for long periods of time. As fierce battles continued for consecutive days mainly around the Nakdong River Front, it was urgently needed to dispatch more soldiers to the battlefields. During the war, Jeju became the last bastion for training troops to defend the country. The earlier army training camps in Daegu and Busan were relocated to Jeju to be integrated into the 1st Army Training Camp. This implies that the South Korean forces were pushed down southward. Korea’s southernmost island of Jeju was the last offensive and defensive end for South Korean troops, who had no place left to retreat to and who refused to give up the spark of hope to protect their country with all their heart.

At the time, the Jeju camp trained approximately 500,000 soldiers, of whom some 2,000 were admitted a day. There was even an occasion where 80,000 people joined the military through this camp. In 1953, the military camp was nicknamed “Military Buildup Camp” as it was Korea’s main source to build up its military forces.

After the war, the training camp was relocated in August 1954 to its current location in Nonsan, Chungcheongnamdo Province, and the Jeju camp was closed in January 1956. Now, the only remains of the camp are the two columns that were formerly used for its front gate. The concrete columns standing on each side of the road are likely to be passed unnoticed. When recalling the gratitude of Koreans for their fallen heroes, however, visitors will sense the noble spirit of the courageous soldiers who risked their lives to protect their country. Moseulpo, the district where the Daejeong-based camp was located, has many different sites related to the Korean War. The current Daejeong Elementary School was formerly used as a temporary air base, and the monument stands alone in a corner of the school ground. Other war-related historic sites in Moseulpo include the ROKA 29th Division Commemorative Tower, the site of the former Prisoner-of-war Camp for the Communist Chinese Army, and the former ROK Marine Training Facility. The sites, rich in historical value, have been left without proper care and only few people remember them today, which is unfortunate as the lesson that the tragedy of war should not be repeated can be learned from these Daejeong sites.

Another Jeju resource worth attention is olle, a local term for a neighborhood path and the namesake of the island’s famous trail brand. Olle is a path that connects people of a community. Following the path from the entrance of a village, one can sense the humanity among neighbors. Recently, the island’s symbolic Jeju Olle Trail network was reinvented with a peaceful touch ― Jeju Olle Trail Route 6 is now called the “Olle for Peace.” The Seogwipo City branch of the National Reunification Advisory Council and the Jeju Olle Foundation, which oversees the trail network, installed a stone landmark along the route, hoping that the “Olle for Peace” will be extended “from Halla to Baekdu.” The “Olle for Peace” is located near Soesokkak, a southern estuary of Jeju Island.

Meanwhile, the Jeju Olle Foundation has worked to create an Olle trail in North Korea. When the North Korean Olle trail opens to the public, it will allow for walkers to take the great journey for peace “from Halla to Baekdu.” Unlike pilgrimage routes, the Olle trail is a trail of hope, where visitors can feel the laughter and affection that people living along the path share with their neighbors. That is why much is expected of the “from Halla to Baekdu” journey once it is connected to the “Olle for Peace.”

Jeju has many more sites whose images can be used for Korean reunification. For instance, the coastal forest path of Keuneong in Namwon, a northeastern town, looks similar to the map of the Korean Peninsula. Another example is the Kim Man-duk Memorial Hall, which reminds visitors of the implications of benevolence and reunification. To rediscover such places, this project should be further promoted. 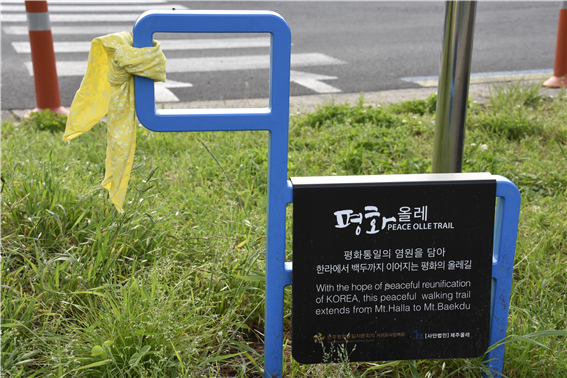 Storytelling with the Theme of Korean Reunification and Peace

The core of the project is to develop a “storytelling” program that is different from the existing unremarkable tourist programs with the theme of Korean reunification and peace. In a sense, the project will breathe life into Jeju’s tourism resources through the technique of storytelling.

Specifically, the project will organize the existing tourist resources of Jeju into a network, optimizing visitors’ itineraries to their length of stay. For this purpose, specific 2-day-1-night programs, 3-day-2-night tours and so forth will be developed. Additionally, a camping program will be organized to integrate local tourist resources. The program will bridge major tourist sites through storytelling with the theme of “Korean reunification revisited in Jeju,” with a particular focus on the seasonal characteristics, the representative color, etc. of Jeju Island, rather than on the popular or scenic spots. A good example is canola, a symbolic spring of Jeju that blooms yellow flowers. The program can redesign the significance of the flower and its color from the perspective of Korean reunification. For another instance, Saryeoni Forest on the southeastern region of Jeju Island can reinvent the meaning of the color white — the color that represents winter in the forest — from the perspective of reunification and peace by transforming it from simply highlighting the popularity of the winter forest.

From Dark Tourism to Emotional Tourism for Korean Reunification 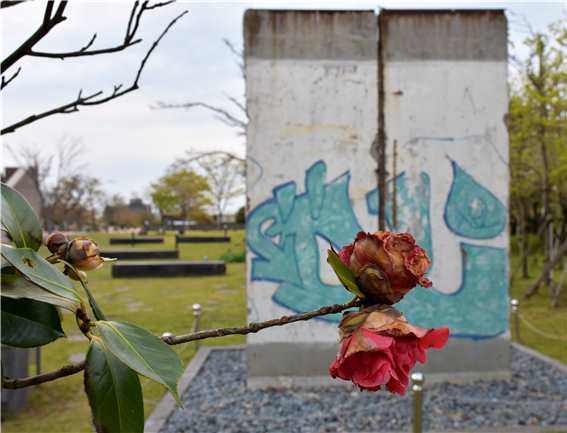 <The Berlin Wall Monument stands in the Jeju 4·3 Peace Park.>

The Berlin Wall Monument, representing the Reunification of Germany, and the camellia
flowers, representing Jeju Island, harmonize in the Jeju 4·3 Peace Park.

As mentioned earlier, Jeju needs to connect its content to tour products that benefit its title of being “an island of world peace.” In this context, the planned program of revisiting Jeju from the perspective of Korean reunification will redesign the island’s image to achieve this goal. The program will also provide an opportunity to create a new brand value for Jeju Island. New tour products can be developed to diversify demand, while experience-oriented tourism can generate more economic benefits than the common shopping-oriented tourism industry. Expectedly, these impacts of the program will eventually help Jeju gain public recognition as a field of reunification, security, and peace.

Efforts to achieve mutual existence, harmony, and peace will naturally draw kindness, openness, and stability from Jeju residents, which will create an image of Jeju islanders as people who are committed to peace. Ultimately, the planned program with a new concept of Jeju tourism will imprint upon the Jeju residents the image that they are peaceful global citizens. Jeju has already branded itself as “an island of world peace.” Jeju’s status as an island of a divided nation will hardly allow for discussions on peace in its true sense. How about branding the slogan “From Halla to Baekdu” and, with that brand, developing a symbolic character for Jeju with the theme of Korean reunification and peace? A significant example is the recent case where young artists created a character image of Jeju haenyeo and made character-themed products with that brand. The character branding of Jeju haenyeo excellently reinvented the unique local heritage of Jeju with a modern touch. Taking this case as an example, Jeju will hopefully become a starting point for peace and Korean reunification through embracing Halla and Baekdu. 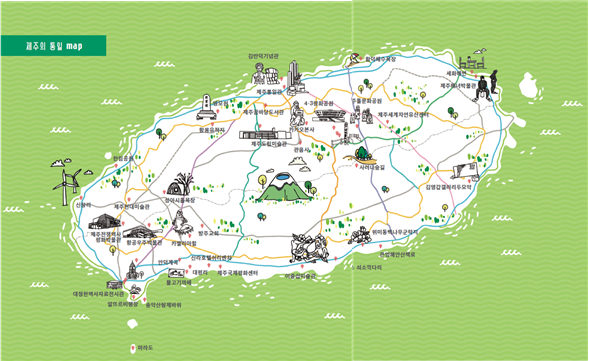 Seong-Joon Ko is Emeritus Professor of Jeju National University, Jeju, Korea. he has been Professor of Political Science in Jeju National University(1977-2016.2). He was visiting Professor of Eat Asian Institute in Columbia University, New York. U.S.A(1999). He was Chairman of Jeju International Council. Also, He is chairman of the jeju citizen association for the world peace island. And the director of Jeju Institute for Korean Unification. He has Written books including 「Juche Idea and North Korea」(co-author), 「North Korea in Transition」(co-author),「East Asian and Jeju, Peace Island」(co-author), 「OKina and Peace」(co-author).「New understanding of unification problem」, 「Unified Korea and World Peace island Jeju」(co-author). He received his B.A and M.A in Mass Communication From Sogang University, Korea and Ph.D. degree in Political Science from Konkuk University, Korea.

Dong-Wan Kang is a Professor at Dong-a University Hana Center. He received his PhD in Political Science and Diplomacy from Sungkyunkwan University. His main research interests are South-North culture, North Korean defectors, North Korean media and has written, among others, <Pyongyang of Their Own>, <North Korea Outside of Pyongyang>, <Division in Russia>, <Man to Man: Meeting North Korean People in Kim Jong Un Era>, and <North Korean Cigarette: Variations of Propaganda and Brand>.